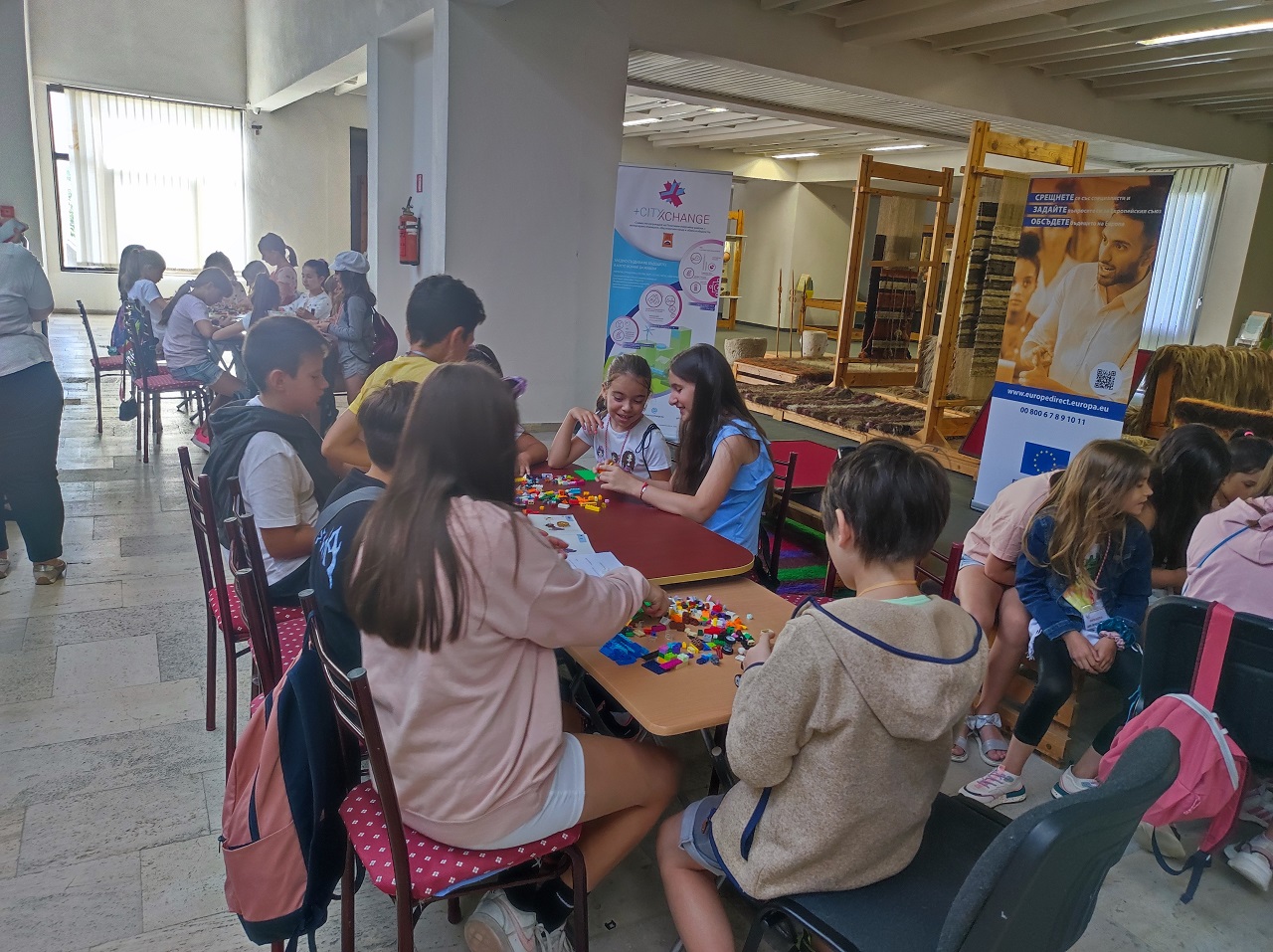 Firstly, at the beginning of June, members of the +CxC team held their 3rd self-facilitated Climate Fresk in the co-creation space Sky Hub Smolyan with the participation of ninth-graders from PGI “Karl Marx”. The primary mission of the initiative was to familiarize children and adults with the causes of climate change. The understandable language in which the cause-and-effect relationships were described in the workshop kept students’ interest and made it easier for them to learn the connection between human activities and climate change. Students learned new concepts, discussed measures to combat climate change and gave their suggestions on which of them should be implemented in their city to make it more sustainable.

Secondly, over the two day course, 6-7 June, an energy efficiency expert from the Municipality of Smolyan held open lessons for ninth graders in the “Ivan Vazov” high school, Smolyan. The class focused on the tools provided by the Horizon Energy Box, a set of different modules were used to demonstrate different types of RES and how to use them together. The initiative aimed to gain interests in young people about using green energy through practical experiments that showed how different RES like solar panels, fuel cells, salt-water cells, etc., work. During the lessons, students learned the principles behind the demonstrated RES and had chances to perform experiments in a controlled environment.

Thirdly, from 20-26 June, Smolyan city organized a campaign to improve garbage collection. The survey was conducted through an online tool provided by Space Engagers, partners in the +CxC project, that enables the city and residents to experiment and work together to improve the urban space. As a result, citizens can express their opinion on where additional containers for household waste and containers for separate collection need to be placed. The municipality also received feedback where other containers such as park bins, public composters and construction waste receptacles are most needed. 65 responses were received and the survey showed increasing of interests in improving the waste management, the use of public compost bins, collecting plastic bottles and recycling bins. Some suggestions included: promotions of civic control, placement of waste receptacles based on the number of residents in the area, video surveillance on critical regions, fines for violators, information campaign about disposing electrical and electronic equipment and construction waste, introducing a collecting specific time.

Fourthly, The +CxC team from the Municipality of Smolyan facilitated the 4th Climate Fresk workshop, this time together with the youth organization “Young Innovators for Youth Development” YIYD. The event aimed to introduce wide audiences to climate change’s causes and consequences, and discussed possible solutions and the role each of us plays in preserving the environment. The participants showed great initiatives in giving specific measures and solutions implemented in the city by partnership between local government, civil society and business. Some ideas included adapting the urban environment for bicycle transportation, using electric scooters, replacing heating appliances, using rainwater, reforesting and cleaning green spaces, etc.

Fifthly, Smolyan city was facing many challenges in setting the Bold City Vision 2050. One of which was development a sustainable city environment. So that, on 13 and 20 July, the municipality asked children aged 6-12 – who joined the initiative “Summer Vacation in the Museum” by the Regional historical museum “Stoyo Shishkov” – to imagine how their city will be in the future. By using LEGO sets, the children played with building future Smolyan as their thoughts. They had options to work in a team or independently and created everything which they thought necessary, such as buildings, vehicles, equipment, robots, etc. After making mock-ups, each participant explained what they had created and where they placed it in the future city model.

Lately, On 23 and 28 of June and 21 of July, experts from the +CxC team of the municipality organized demonstrations of the kit aimed at children aged 7-12 as part of Summer Programs organized by the Regional Library “Nikolay Vranchev” and the Regional History Museum “Stoyo Shishko. The Municipality acquired Horizon Energy Box to acknowledge students and the Next Generation Smart Citizen about RES. The Renewable Energy Box provided demonstration of how fuel cell technology interacting with renewable energy sources and creating an entirely sustainable power grid. There was a range of fuel cells to compare: PEM hydrogen fuel cell, the salt water fuel cell and a direct ethanol fuel cell. The box gave experiments and demonstrations about energy principles and had plenty of space for creativity.

There are a lot of learning and interactive activities currently happening in Smoyan. You can take a look at  ОБЩИНА СМОЛЯН :: ПРОЕКТИ :: CITYXCHANGE (smolyan.bg) for original news available in Bulgarian. 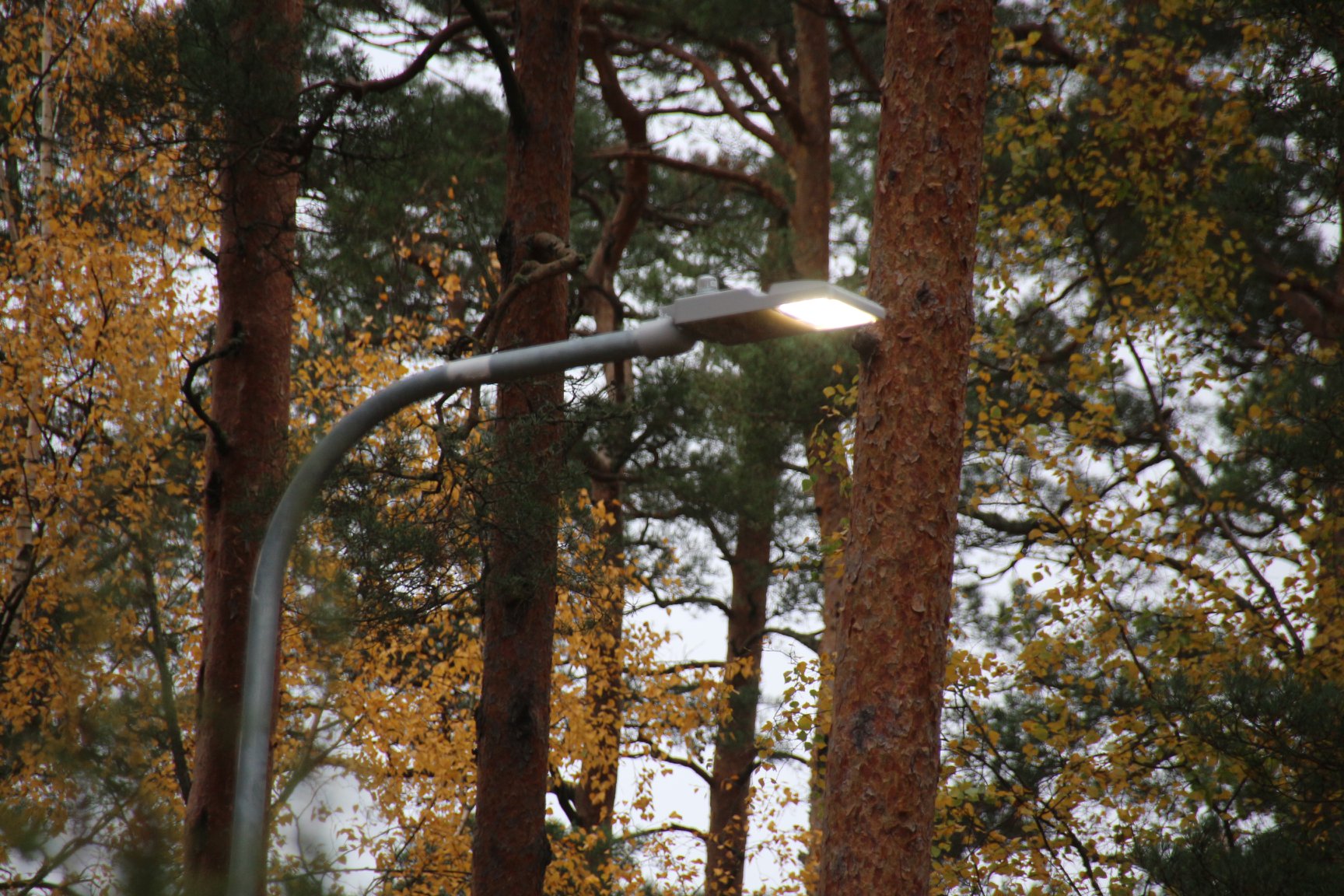 Our follower city, Võru, is the first city in Estonia, and as far as we know, in the Baltics, where street lighting is 100% provided with energy-efficient LED lamps. During the last six years, the city of Võru has been working to ensure that street lighting throughout the city is modern, efficient to run and safe.

“The city of Võru has completed the complete modernization of street lighting, which has resulted in a significant increase in electricity savings, environmental sustainability and considerably improved traffic safety on pedestrian crossings,” commented Mayor Anti Allas.

“Many thanks to us to the Environmental Investment Center (EIC), who has supported the modernization of street lighting,” said Visnapuu.

Under the leadership of the EIC, by the autumn of 2015, seven Estonian cities received new street lighting based on LED technology, which was considerably more energy and environmentally friendly than before. “This was a unique project, where in addition to the usual mediation and supervision of grant money, the EIC organized procurements for cities and was responsible for project management. One of these cities was also Võru, which at that time made its city whiter and more sustainable. Later, we have contributed from the structural funds to the modernization of street lighting in the city of Võru,” – says Andrus Treier, the head of EIC – “City street lighting works smarter and more economically.”

The last sodium lamp of the street lighting in the city of Võru was removed and replaced with a new LED lamp October 29, at 1 pm on Männiku Street. 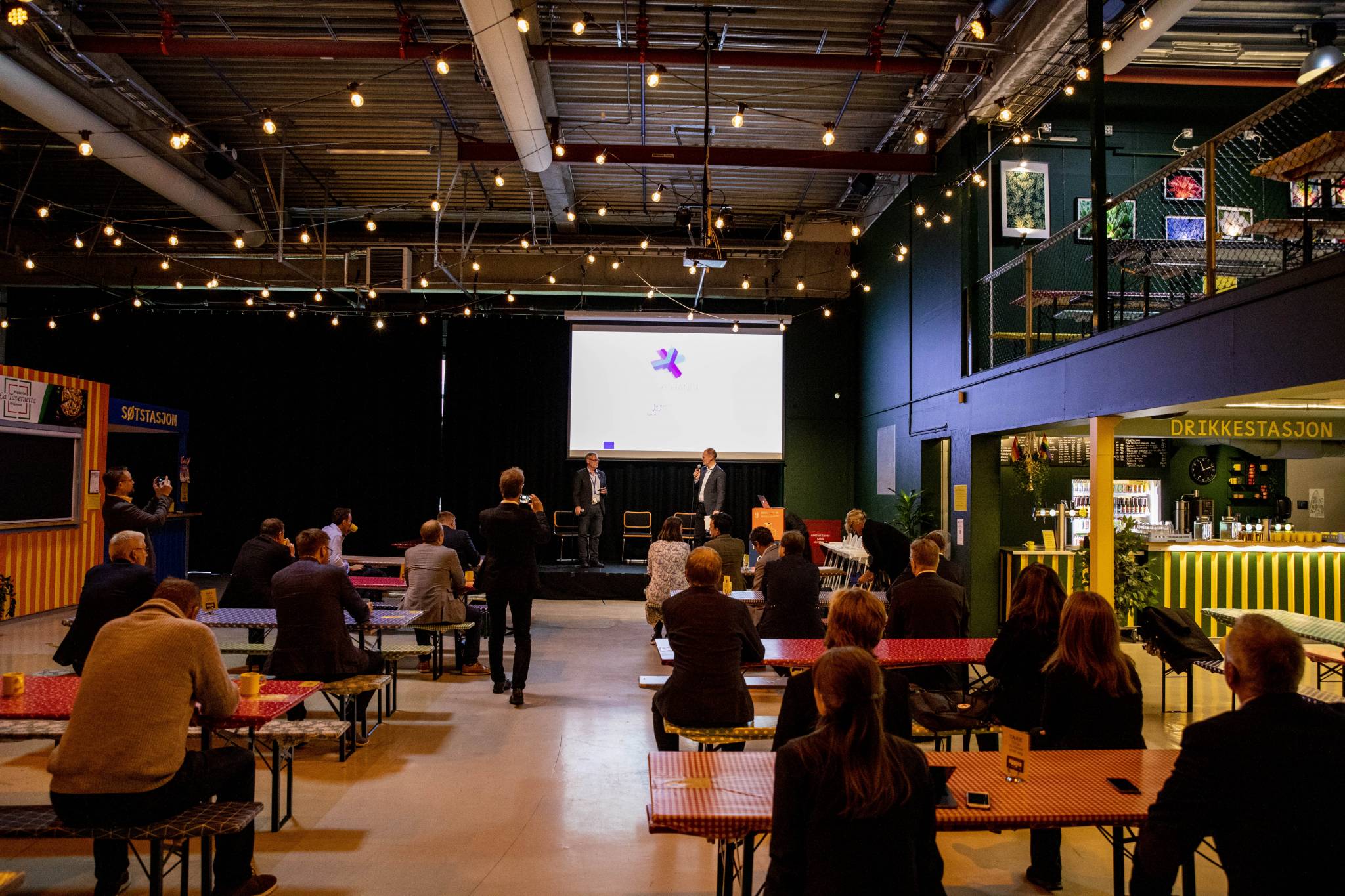 Over the past year and a half, partners have come together in the EU-project +CityxChange to develop forward thinking solutions within the energy sector.

Many partners gathered at Lager 11 in Trondheim on September 10th to exchange experiences so far within the project and to look at new business opportunities. At Lager 11 you’ll also find one of +CityxChange’ city labs. It was officially opened by the Minister of Local Government and Modernisation, Nikolai Aastrup. The lab provides information about the Sluppen area and about the project and its partners.

“The work and effort put into this project is quite impressive” says Chief City Executive in Trondheim, Morten Wolden. Wolden opened the meeting together with Vice-Chancellor for Innovation at NTNU, Toril A. Nagelhus Hernes. They explained how +CityxChange facilitate public-private cooperation for innovation and co-creation on a sustainability perspective. 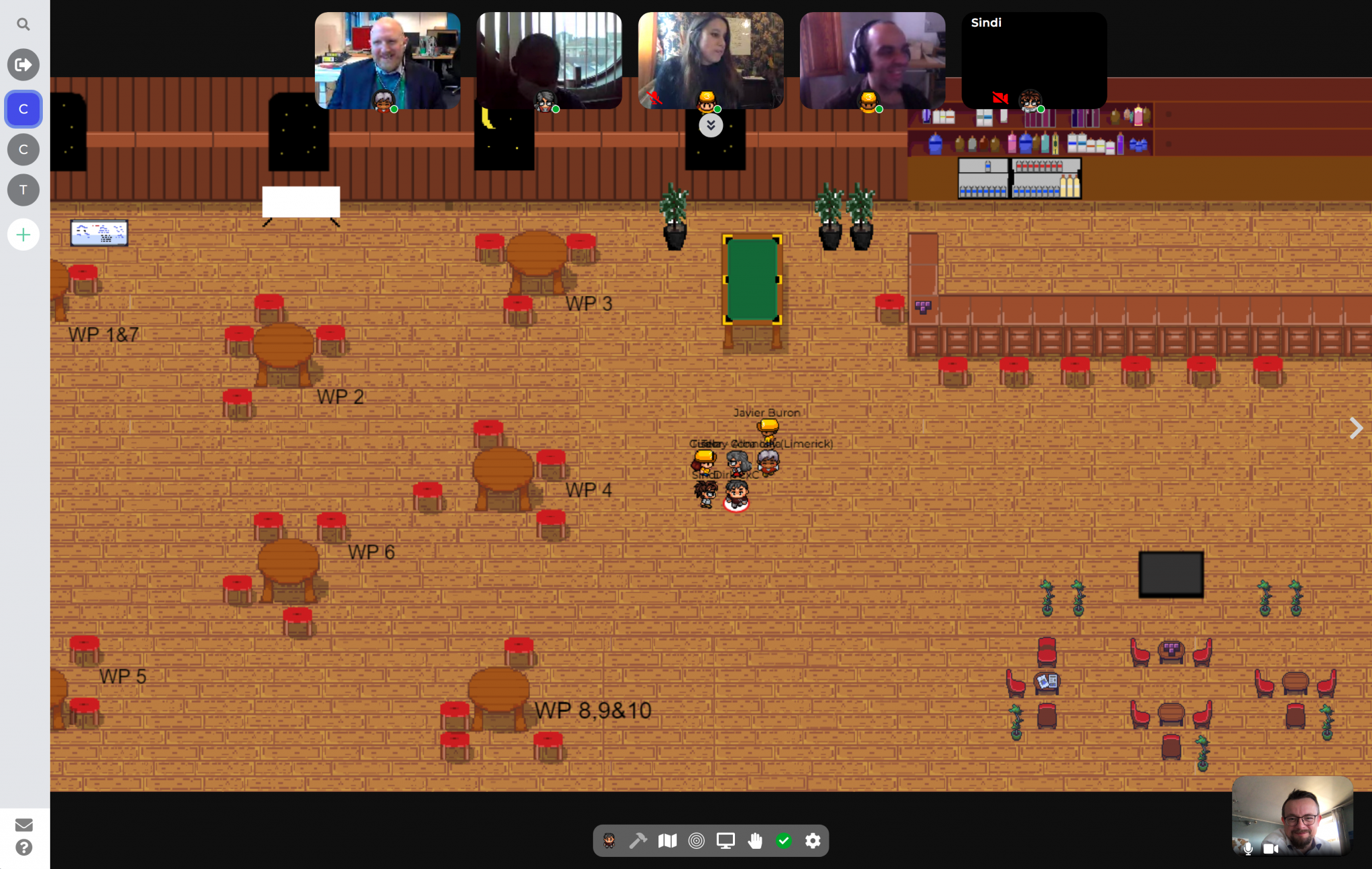 On the 20th of October 2020, ISOCARP Institute hosted the 3rd +CityxChange Stoyreliing Workshop in a digital format, as part of our annual consortium meeting.  The aim of the workshop was to understand and reflect on storytelling as a tool for citizen engagement and communication. The event lasted around two and a half hours with discussions and presentations from other Smart City projects in the Basque Country – a place where the consortium meeting would have been celebrated in case Covid-19 travel restrictions did not apply. The main objectives of our third Storytelling Workshops were:

The session started with a video from Iñaki Peña, journalist and resident in the city of Sestao, Spain (Follower City in +CityxChange). The video (about 11 minutes long) tells the story of changes and developments in Sestao, with a focus on La Casa del Arco (The Arch’s House). Iñaki tells us about the developments and transformations that this building has been through, by using his past experiences, his youth and what he remembers of La Casa del Arco. The later used to be a building with a strong industrial history, that is now being restored with the combined efforts of the Sestao Municipality, the Basque Government and the European Community.

‘La Casa del Arco, – Iñaki reflects – is the beginning of a progressive restoration of the city’. Iñaki foresees that this development will bring new possibilities to the city, such as, the restoration of nature and the river that was until nowadays used for industrial purposes. Having Iñaki’s story as the kick-off of this workshop, participants were asked to reflect on the structure, the line of narrative and the communication elements that were used.

The session continued with the intervention of three lighthouse cities. Firstly, Jordán Guardo from the Municipality of Bilbao reflected on the ATELIER experience giving examples of positive urban developments and citizen engagement practices. The project focuses on a river area close to the industrial city of Bilbao, concretely, Zorrotzaurre. Zorrotzaurre was a very industrialised small island. Building efforts, using top-down and bottom-up approaches, the ATELIER project achieved a combination of arts, culture and economic development in the zone.

Secondly, David Grisaleña from the Municipality of Vitoria Gasteiz. David presented the SmartEnCity: Coronación District. The objective of this lighthouse project was to develop a systemic approach for sustainable, smart and resource-efficient urban environments in Europe. David explained how through citizen engagement, they could develop strategies to replicate Energy retrofitting buildings. The example given by David was located in Eulogio Serdán Street. Some of the discussions that came up during the presentation were related to how the housing property system works in Spain and the challenges that appeared during the communication of more technical developments with house owners in the building.

The last speaker, Marta Zabaleta, joined to present the REPLICATE project. Particularly on the Donostia/San  Sebastián citizen engagement process. Shortly, Marta presented the objectives of the project, and how they used to top-down and bottom-up approach for citizen engagement. Marta explained their interaction with the citizens since the very beginning of the project. ‘It is crucial – she said – to have the common understanding and collaboration with the residents before and during the execution of the project.’

After the discussions, participants had the chance to come up with their own story based on a building – like Iñaki Peña – a public space or neighbourhood in their area that would reflect urban transformations. The exercise divided the participants into 3 main groups, the participants had to explain their urban development story and jointly discuss the structure and communication points. By the end of the breakout sessions, each group had to choose a representative from their group to present their story to the whole group of participants.

The storytelling workshop finished with a short interaction session, commenting on each other stories and reflecting on the usage of storytelling as a tool to tell stories of places for further citizen engagement.