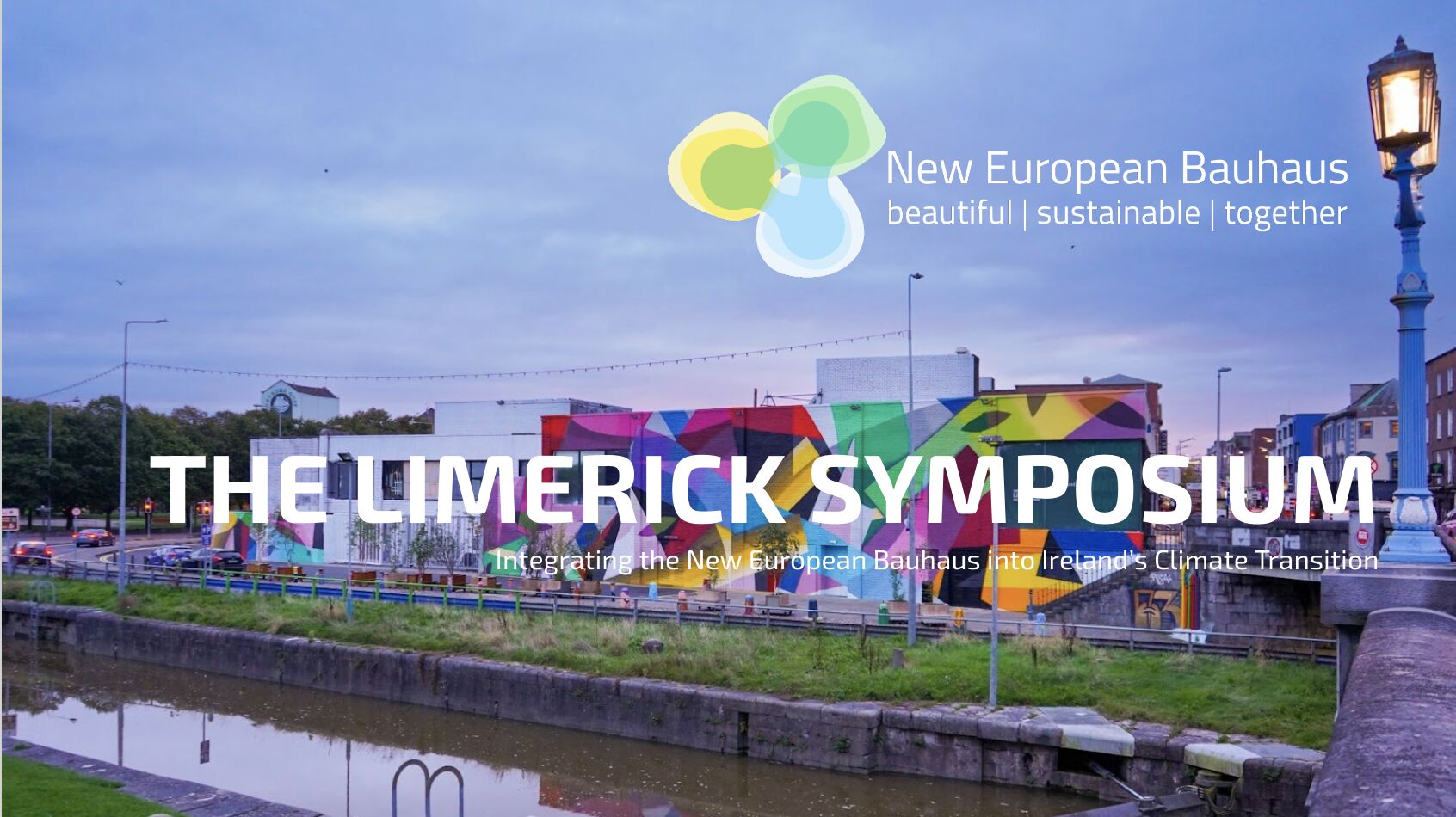 Limerick’s Citizen Innovation Lab hosted a symposium on October 13th. At the event +CityxChange project partners presented infrastructural demonstrators, and shared insights and learning from project implementation to date, with Dublin and Cork – the Irish cities taking part in the “100 Climate-neutral and Smart Cities by 2030” Mission. The invited audience included people from government departments, local authorities, academia and state agencies involved in the delivery of Ireland’s Climate Action Plan and Cities Mission.

At the symposium, Limerick City and County Council presented an overview of the +CityxChange Demonstration Projects. The project’s systematic co-creation approach, CommuntyxChange, was presented by University of Limerick, and its alignment with the New European Bauhaus policy initiative explored. Citizen Innovation Lab Stories told by Positive Energy Champions demonstrated citizen interactions with digital tools for collaboration and project impact in Limerick. During the event the Limerick Energy Model and the Community Mapping Tool were demonstrated in the Citizens’ Observatory, and there were tours of the School of Architecture at University of Limerick’s Fab Lab Limerick.

Limerick based SME, GKinetic Energy Ltd., detailed the development of their tidal turbine where stakeholder engagement enabled by the project’s open innovation approach informed the evolution and siting of their design. IES R&D presented Limerick’s decarbonisation roadmap to 2050. This scenario was developed using the Limerick Energy Model, the Decision Support Tool and digital twin of the city created through +CityxChange.

The symposium was supported by the Government of Ireland’s Department of Housing, Local Government and Heritage under the Value and Empower strand of the National Policy on Architecture. It wished to amplify the Citizen Innovation Lab’s citizen-centric approach to innovation, which embraces the New European Bauhaus values of sustainability, beauty and inclusion. It was great to see so many people gather in Limerick’s Citizen Innovation Lab for this event.

Recordings of The Limerick Symposium – Integrating the New European Bauhaus (NEB) into Ireland’s Climate Transition are also available to view. The three panel sessions include: 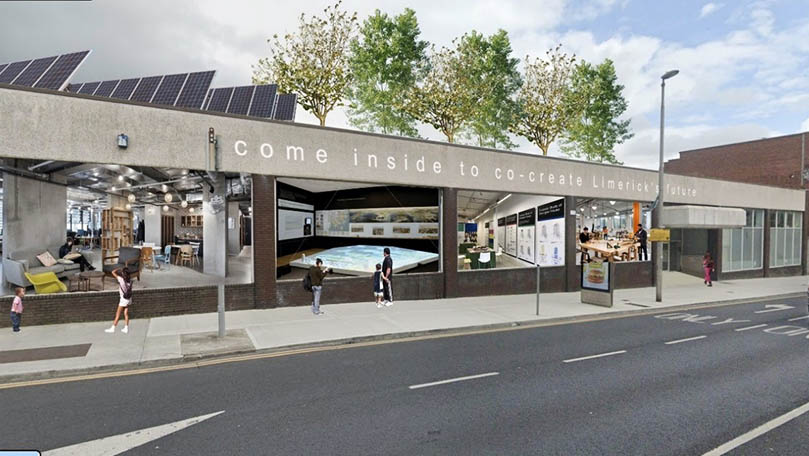 Co- creating the future we want to live in.

The +Limerick Citizen’s Innovation Lab is a new way of engaging members of the public, groups and organisations in helping to create Limerick’s future.

Based in the old Dunnes Stores building on Sarsfield Street in the heart of Limerick City Centre, the Innovation Lab will provide a physical and digital space where citizens can work collaboratively with the local authority, University of Limerick and other interested stakeholders to develop solutions focused on the energy transition, climate action and sustainability. 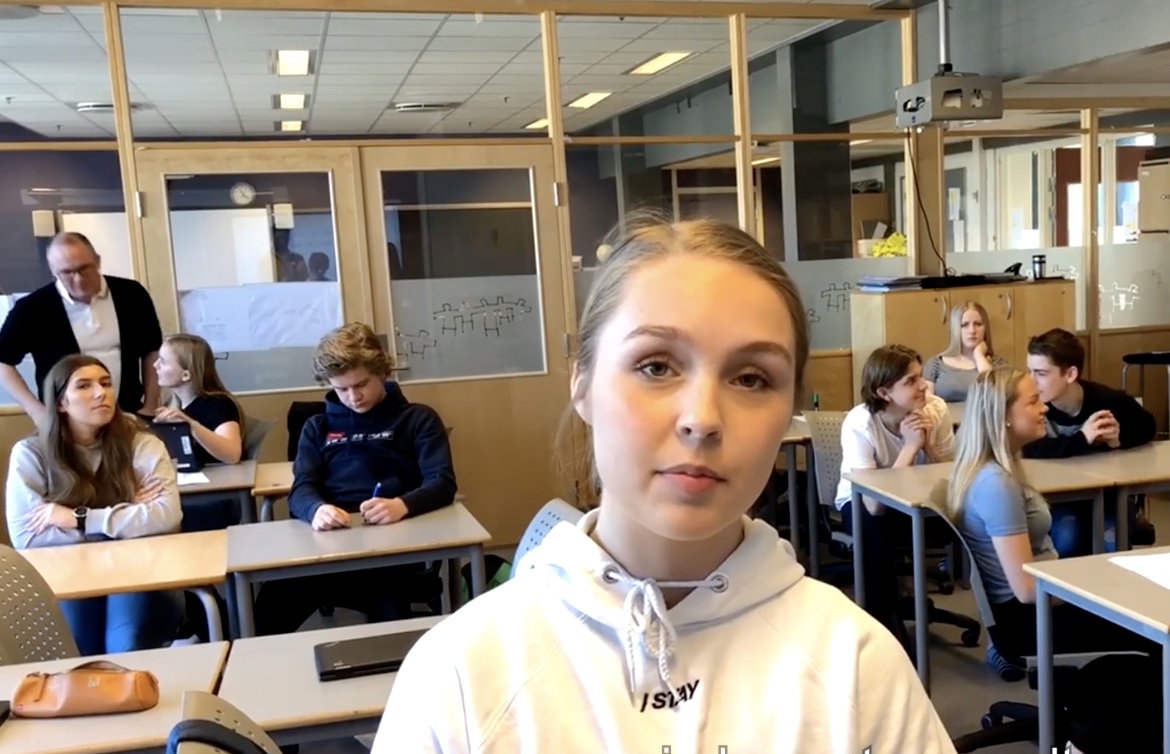 The Renewable Energy Scavenger Hunt was an event that was organised by Trondheim Kommune in Trondheim with a local secondary school to engage students with the themes of sustainability and energy. Seven stations that students would visit during the activity were set up. Activities at the stations included talks by guest speakers about micro grids, real-world demonstrations of renewable energy generation, ideation sessions, and various workshops on related themes. The event took place at the Sluppen City Lab, where there are plenty of examples of renewable energy generation, sharing, and smart mobility solutions for students to see and learn from. The event took place face-to-face on 28 September 2020 and involved approximatively 200 participants over 4h.

The online event, organised by the University of Limerick, took place online in September 2020 as part of the CityEngage week and was designed to have two parts. The first part included a series of invited short talks given by representatives of the +CityxChange project (from LCCC and UL) and local communities representatives. The talks were recorded and shared on social media(via Twitter) one week before the event, to create a common ground for the discussion in the second part: a synchronous online meeting following the Open Space model. The participants proposed a number of topics for the discussion, such as: Renewable energy sources and the Georgian Limerick – How can mobility become “smart”?; Protecting habitats while introducing renewables- a better city for all beings, not only people; Planning a sustainable smart city – How can the city planning process become more participative?

Next, online rooms on each topic were opened and the participants were able to join different rooms, based on their interest in the particular topics. After 30 min, the participants returned to the main room and shared a summary of what was discussed with all the 22 participants. 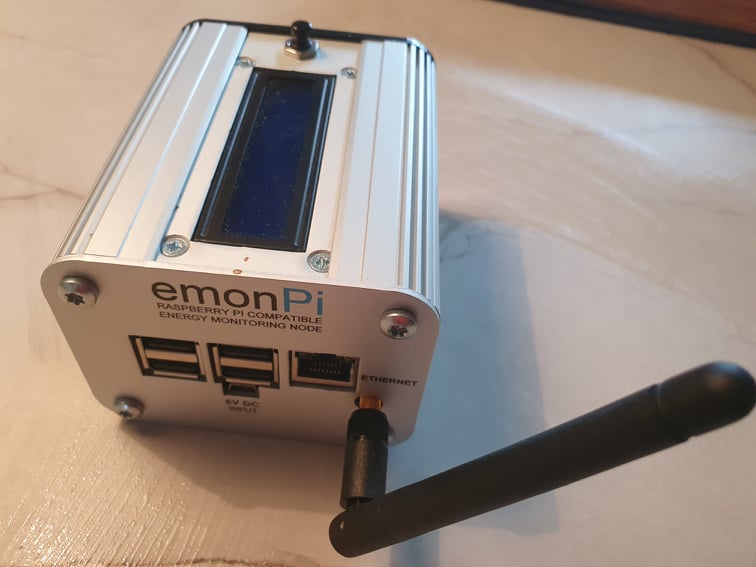 Our Spanish partner Colaborativa organised an online workshop during the September 2020 CityEngage Week in Limerick for those interested to learn how to make and use open hardware home energy monitoring devices. The workshop focused on preparing the participants to start measuring energy usage in their own homes, sharing data within their community and experimenting with these devices. The event was also aimed at bringing together members of the public with an interest in potential shared uses of the data generated. The event brought together 25 participants. 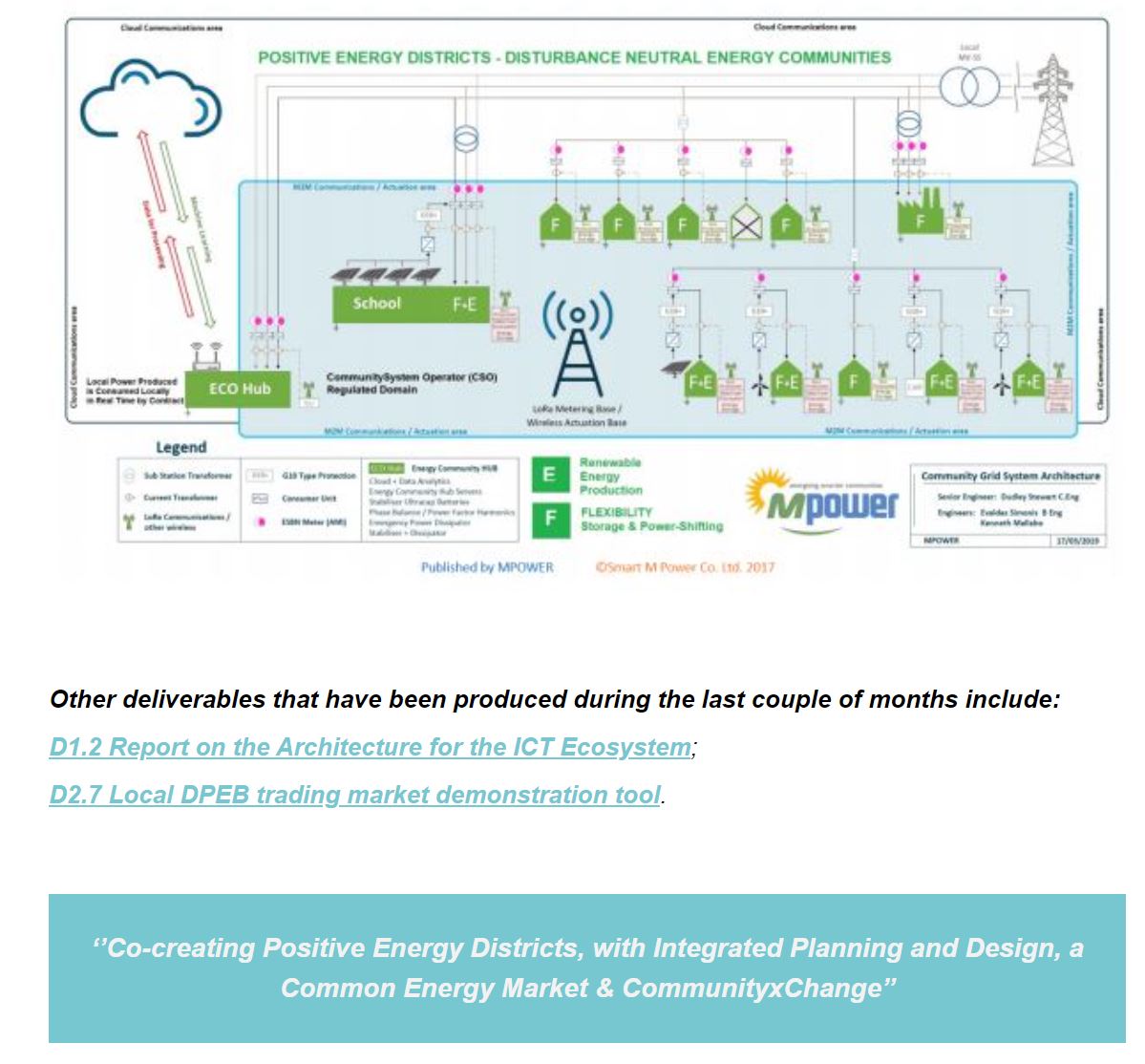 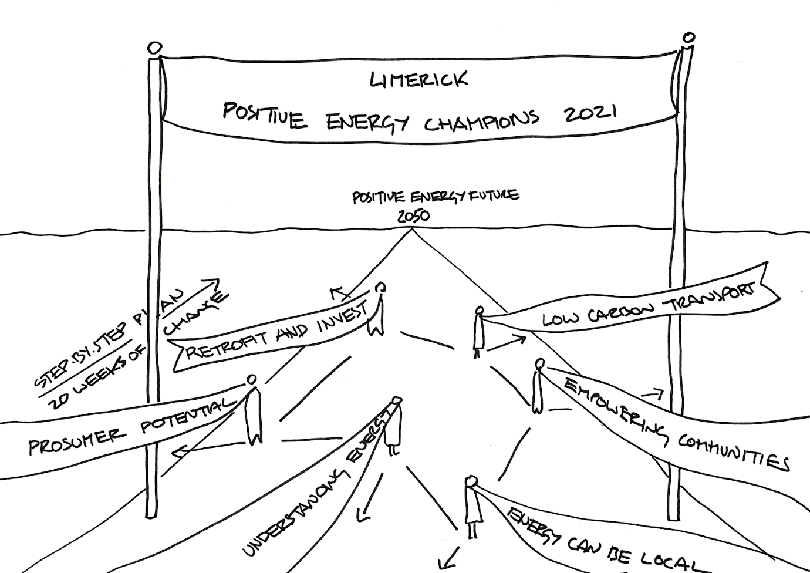 Join a team of Limerick Positive Energy Champions by incorporating Positive Energy Actions into your daily routine for twenty weeks. A small change can have a big impact on your energy consumption, on your carbon footprint and can help create a pathway to Limerick becoming a Positive Energy City by 2050.

It can be frustrating and confusing to know what meaningful actions individuals, businesses and communities can take to combat climate change. For this reason, Limerick City and County Council and the +CityxChange team are exploring the development of a structured approach to enable Limerick to become a Positive Energy City by 2050, where individual actions can have a local and cumulative impact and contribute to measurable change.

Apply on Limerick City and County Council’s consultation and collaboration platform, My Point.

The closing date for applications is 5 pm Tuesday 6th April.

If you have any queries regarding the application process, please email cityxchange@limerick.ie. 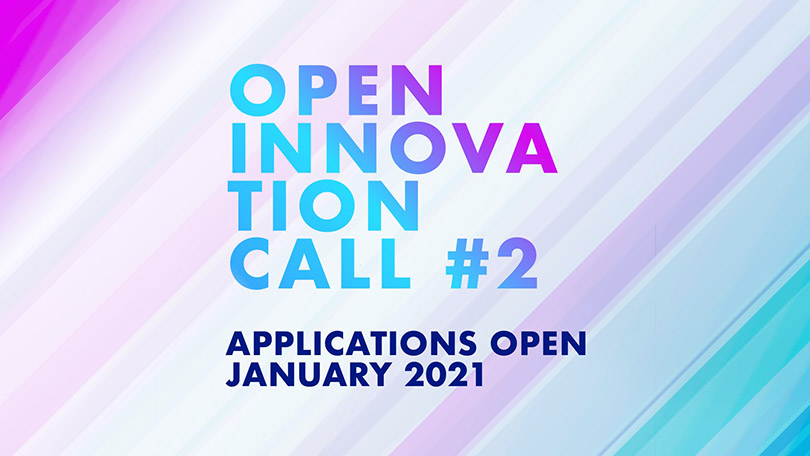 Do you have an idea that could help transform the way Limerick uses energy? Open Innovation Call #2 is focused on generating and supporting new ideas that contribute to an ambitious ongoing goal for the city: creating a positive energy district, a compact area that actually produces more renewable energy than it consumes.

This goal is the work of the +CityxChange Project, which organises the Open Innovation Calls. These Calls are a way for members of the public to join the work of the project, by demonstrating ideas, pilot projects and prototypes that can be tested in real-life settings in Limerick. Open Innovation Call #2 is focused on software-based projects that could improve how homes, businesses and residents use energy – making energy use simpler, more accessible, and more streamlined.

Citizens, makers, creatives, startups, businesses and other stakeholders are welcome to apply for funding and get involved. Eligible projects could include using sensors and data to understand energy use, empowering communities to take control of their energy, visualising financial cases for community grids and renewable energy cooperatives, and other innovations that support communities to take an active part in the energy transition.

Applications to the Open Innovation Call will be open in January 2021. An Information Session and Matchmaking Event will also take place. Details to be announced soon.

Please email cityxchange@limerick.ie to register your interest or to ask questions. 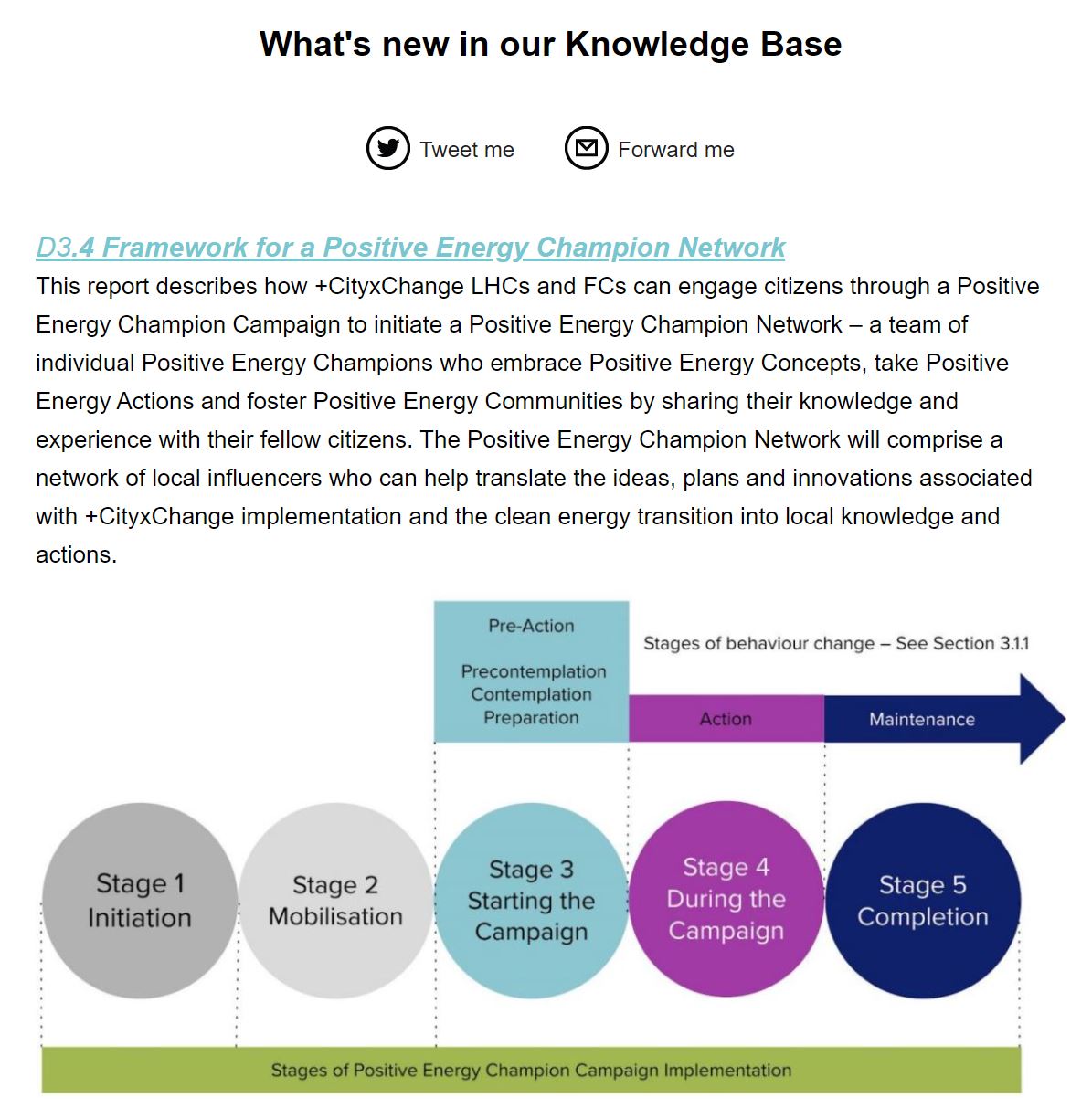 Cities need an adequate set of framework conditions in the field of regulations to fulfil their climate and energy ambitions. We, therefore, launch a new initiative on regulatory frameworks, which will be jointly led by NTNU, City of Trondheim and Powel. The Initiative will identify and support concrete changes for the regulatory framework to become an enabler towards climate-neutral cities, rather than a barrier. The enclosed plan sets out our ambitions for the coming years. The Initiative will be based on the experiences of +CityxChange and other SCC01 Lighthouse projects, and further developed together with Smart Cities Marketplace experts and practitioners.

This Smart Cities Marketplace Initiative will support the transition towards climate-neutral cities laid out in the European Green Deal, by helping to develop the regulatory framework conditions required for cities to fulfil their climate and energy ambitions. It aims at providing an overview of the most persistent problems with regulations and proposes changes focused on best practices in cities, industry, research and societal stakeholders that engage in transdisciplinary demonstration and innovation activities. This will be executed in order to deliver results that support the transition towards climate-neutral cities. The Initiative is based on the experiences of +CityxChange and other SCC01 Lighthouse projects.

It will be launched online on 21 October 2020 between 14h-16h. To this launch, we kindly invite experts from European, national and local authorities, industry and social entrepreneurs, financial sector, NGOs, research organisations, academia, and civic organisations.

During the launch, the Initiative will be briefly presented, followed by a workshop to map priorities, needs and capacities. You are kindly requested to share your reflections on the following questions with us:

Please send your answers at your earliest convenience to Annemie.Wyckmans@ntnu.no, klaus.livik@powel.no, marit.myrstad@trondheim.kommune.no. This information will be used for preparing the event.

Check out the workshop agenda.

Registration has been closed
A new Smart Cities Marketplace Initiative on Regulatory Frameworks within the Integrated Planning, Policy and Regulation Action Cluster